Understandably, overthinkers tend to struggle when trying to declutter. Here are the biggest decluttering mistakes that I see overthinkers make every day — and how you can avoid them! If my top decluttering tips have you ready to get to work, read the tips below first to save yourself some time and frustration.

This post may contain affiliate links. If you choose to purchase through an affiliate link, I may receive a small commission at no additional cost to you. You can see my full disclaimer here.

I talk quite a bit about overthinkers and decluttering because I know firsthand just how paralyzing such a big task can be for people who think too much. Even just figuring out where to start decluttering can be overwhelming sometimes!

Today’s post is all about a little tough love. Decluttering in itself is a tough job, and it’s only made harder (and takes longer) when you make any of the mistakes on this list.

If you think the process of decluttering alone takes a long time, you’ll be amazed at how much time you actually tack on when you make some of these common mistakes. It’s not a pretty sight.

So… I’m basically giving you a cheat sheet here to help you save time by avoiding some of these blunders! 😉

Top 7 Decluttering Mistakes and How to Avoid Them

Here are the most common mistakes that declutterers make and simple ways to prevent doing them yourself.

1. Thinking You Can Just Get More Organized

Ok, this one is at the top of my list because it’s the #1 biggest mistake I see people make again and again.

‘Getting more organized’ by bringing in lots of pretty containers to organize your stuff doesn’t help the problem. You may think it looks ‘prettier’ — but it only adds more stuff to the space and makes the entire problem much worse.

Unfortunately with this strategy, instead of tackling the problem, you’re adding to it and wasting time (and money) in the process.

When too much stuff is the problem, you need to start with a plan of ‘attack’ that involves getting rid of stuff BEFORE you even think about organizing. Make yourself a promise that you will do a major cleanout of the space before you even consider bringing one more item (even an organizing item!) into it.

Ok, picture this: you’re standing there looking at the pile of stuff you want to get rid of and start thinking ‘Wow, some of this could be valuable, maybe I could make some money by selling it.’

Hello, overthinker! I completely understand the idea behind that thought — it’s not totally wrong.

However, for overthinkers it’s just a disaster in the making. Here are some reasons why trying to sell your stuff just wastes your time:

All of these additional tasks lengthen the decluttering process because you have to store the items until you can actually sell them. It’s a drag… and during that time, you just might change your mind about one or more items and end up keeping them.

That doesn’t solve your clutter problem!

Stop right there. Don’t even go down that rabbit hole of thinking it’s worth selling your items. Sure, a little extra money would be nice, but the ROI (return on the investment of your time) just isn’t there.

Instead, before you even begin decluttering, make a firm decision that you’re going to just donate everything you decide to eliminate. Making a simple mindset shift such as this one will make the process so much easier – and faster too!

Trust me, easily getting rid of unnecessary clutter from your physical, visual, and mental space is much more valuable.

Also Read: How to Declutter and Donate Your Stuff Without Regret

When you read this, you may first think I’m referring to friends or relatives outside of your home. While it certainly applies to anyone, I’m really talking about not decluttering your partner’s or children’s stuff.

If there’s a fast track to a rip-roaring fight over unusable cassette tapes, it’s getting rid of your partner’s stuff instead of letting them do it. You just aren’t really able to make those ‘toss’ and ‘keep’ decisions for another person.

When it comes to your partner, I wouldn’t even think of touching their stuff without REAL permission — which you more than likely won’t receive.

Instead, encourage them to go through their own stuff and make those decisions themselves. Offer to take the stuff they choose to cull and donate it for them.

Also Read: 8 Strategies to Use When Your Husband Refuses to Declutter

For kids, I am a huge advocate of letting children SEE you declutter so they can learn the process. You’ll also need to walk through it with them so they learn how to declutter their own stuff and spaces.

4. Thinking Decluttering is a One Time Job

Replacing your flooring may be a ‘once and done’ project. However, like cleaning the bathroom, decluttering is NOT one of those jobs.

We consistently bring new stuff into our homes, and because of that, our collection of ‘stuff’ builds over time. If you let too much time pass between decluttering, you’ll soon find that you have way more stuff than you realized — or want to deal with.

And by that point, the job is so big that it’s overwhelming and eats away a huge chunk of your time in order to tackle the job thoroughly.

Shift the way you think of decluttering away from a giant, overwhelming job that you only do when absolutely necessary to a new mindset that decluttering is a maintenance job that you do in small doses on a regular basis.

It’s a mind-blowing mental shift that makes a HUGE impact on your home and your time. And it makes the job SO much easier! Follow my plan for 30 Days to a Clutter-free Home to help you stay on track and maintain clutter-free spaces.

5. Pulling Everything Out of a Room at Once to Sort and Declutter

When it comes to decluttering mistakes overthinkers make, this is the WORST thing you can do — especially if you’re doing this project alone!

Imagine how overwhelming it is to see ALL your stuff from one area sprawled around another room or outside in the driveway and trying to figure out how to start.

Instead of trying to eat the entire elephant at once, take it slowly. There’s nothing in the ‘decluttering handbook’ that commands doing an entire room at one time. It’s simply too much.

First, you have to get the clutter down to a manageable level before you can even think about emptying a room.

I highly recommend using the slow declutter method. It’s just the best for overthinkers. If it helps, you can liken this method to the fable of the hare and the tortoise. It may seem slower to use the slow method, but it will save you time in the long run and make you the winner!

Also Read (and grab the free printable): 62 Things to Declutter That You Won’t Miss at All

This is a hard one. Going through memorabilia, photographs, or other sentimental items can be a major rabbit hole that causes all decluttering progress to come to a screeching halt.

Often what happens is people will find Mom’s old photograph album and start looking through it or find Grandma’s recipe box and reminisce about her making her famous beef stew.

Is any decluttering happening while this is going on? NOPE. There is totally a time and a place for taking a trip down memory lane by going through sentimental items slowly to absorb and enjoy them.

Decluttering is NOT that time.

Decluttering sentimental items requires a different mindset along with more time and grace. I recommend learning how to let go of ‘normal’ clutter first rather than jumping in with both feet on some of your most treasured items.

Set those items aside for another day when you can really dedicate the time and energy toward taking that trip down memory lane and choosing to part with some of those items.

7. Trying to Do It All in a Weekend

Decluttering an entire home is time-consuming and exhausting. And of course overthinkers think too much when it comes to making decisions about individual items.

Put those two together and you have a disaster in the making when you try to push forward too hard and too fast.

So many people start a whole-house decluttering project with a day off of work or a weekend ahead of them and the idea that they can tackle it ALL in that amount of time. What happens when the end of your time comes and you still have rooms and boxes of stuff to still sort through — and huge piles of stuff sitting in the middle of it all?

It’s not a pretty sight and can make you feel like you just want to give up. The all-or-nothing mentality simply doesn’t work when you start out with overwhelming clutter.

In fact, because I know the toll that decluttering can take emotionally and physically, I recommend tackling the project in short chunks of time — even as little as 15 minutes — rather than all at once. It’ll pay off in spades in the long run.

Try to keep these common mistakes that overthinkers make when decluttering in the back of your mind so you can avoid them. By eliminating them and keeping the task as simple as possible, you’ll set yourself up for success — and get the project done faster, too!

Are there any decluttering mistakes that you find yourself making that aren’t included in this list? If so, leave them in a comment below!

Don’t forget to grab your checklist of simple things to let go of that you will never miss! 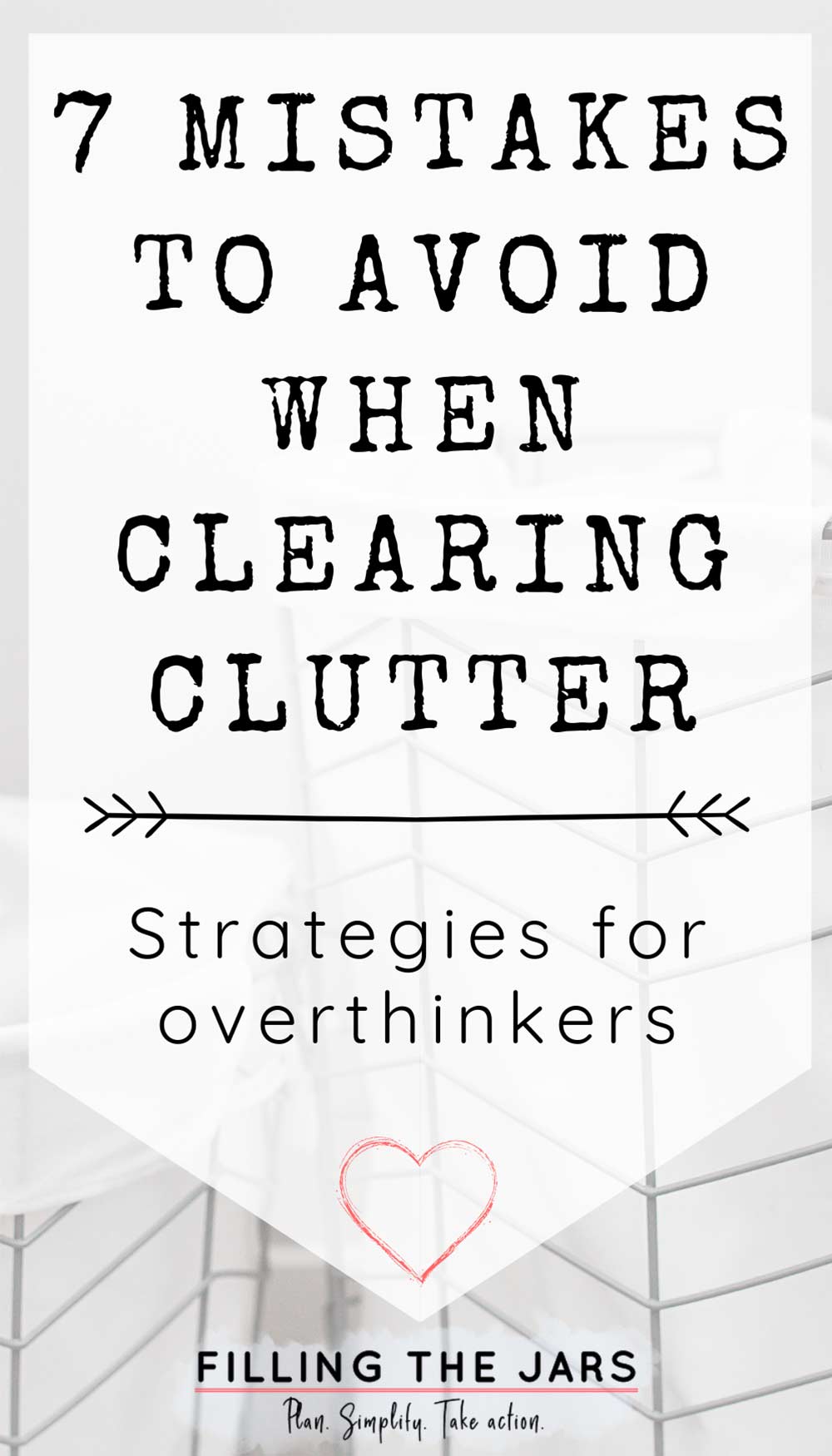