Are you secretly convinced that you’ll just never learn how to change the habit of laziness? Keep reading, because I’ve got some simple tips you can use every day to break lazy habits and become more productive.

This is part of my collection of posts and tips about how to stop being lazy so you can move on to actually accomplishing goals. Everything here is written especially for anyone who feels like it’s impossible to stop being lazy.

It’s not impossible, and you CAN learn to get things done!

This post may contain affiliate links. If you choose to purchase through an affiliate link, I may receive a small commission at no additional cost to you. You can see my full disclaimer here.

Everyone has a different definition of the level of activity that equals laziness.

For some people, getting out of bed every day and doing two or three things is a LOT. This may be due to physical or mental issues.

For other people, the super-achiever people, they can’t understand why everyone isn’t as active and productive as they are.

But if you feel like you really are lazy and need some real help, keep reading. We’re going to cover:

Ready? Let’s do this!

Is It Possible to Change the Habit of Laziness?

Why does it seem like some people are naturally go-getters who accomplish so much every day? At the same time, you feel like the laziest slug who ever existed.

Although everyone claims habits are just habits and it’s easy to change either positive or negative lazy habits, it really doesn’t seem that way, does it?

For some reason, it’s so much easier for many of us to fall into lazy habits. And as with any ‘bad’ habit, it seems so much harder to break!

If you’re living deep in the pit of lazy habits, I’ll be straight with you… it’s not going to be an overnight process. And you probably won’t be able to change ALL of your lazy habits at once.

It’s not quite like you can say ‘I’m going to break the habit of laziness’ and then suddenly begin doing all the productive things in every area of your life.

Being lazy is something that invades everything, from your work life (or lack of one) to your personal life (or, again, possibly not having one), from what you eat to how you shop to the dreams you have for the future.

But let’s look at where you are now compared to where you COULD be after using the tips in this post:

I truly believe you can make these life changes happen, because I do a pretty decent job of being a fairly productive person most days even though it’s not my natural inclination.

If I allowed myself to indulge in ALL the lazy habits, ALL the time, my life would be infinitely more difficult.

Wait… what? Isn’t being lazy LESS work than all that productivity stuff?

It might seem that way. But in reality, the stress you’re putting on yourself with all that laziness makes life just as difficult as getting up and doing some work… not to mention dealing with the snowball effect of what happens when your lazy habits cause you to procrastinate on everything important.

We’re talking about serious health issues, late fees on bills, high credit card bills because you order takeout instead of shopping and cooking, an embarrassing and possibly dangerous living situation…

When you think of yourself as a lazy person and constantly cultivate the habit of laziness, that becomes your identity. It takes a long time to change that mindset and those habits, but you CAN do it.

This is coming from someone who often feels like the queen of laziness. There are still days when I barely get anything done — and on those days, I try to at least do a few tiny productive tasks to keep myself from sinking into a complete blob of goo.

So if ‘I’ can manage to string together enough productive days to actually make progress toward my goals, then I absolutely KNOW ‘you’ can do it!

We’re not talking jumping into uber-productivity here. But when you learn how to change the habit of laziness when it comes to simple things, it becomes easier to push for bigger non-lazy goals like a fully decluttered and comfortable home, a new job, and more.

Let’s talk about what it actually takes to dump the old habit of laziness and begin forming new habits.

Getting into the habit of doing something is often easier said than done. We seem to acquire bad, lazy habits without any effort, but forming a ‘good’ habit can be more challenging.

Let’s break it down into an easy three step process to follow until we’ve internalized the new behavior and made it a true habit – something we do automatically without having to think about, like brushing our teeth.

1. Specify What New Habit Will Replace an Old Lazy Habit

What new, productive habit are you going to implement? Be as specific as possible.

Instead, say something like, ‘I will declutter 5 pieces of clothing from my closet.’

Now you know EXACTLY what you will do every single day. The more specific you are, the easier it is to visualize acting out the new habit AND the effect it will have on your life.

2. Remind Yourself to DO the Non-Lazy Thing

For the first few days, you’re motivated and excited. Sticking to your new habit is usually pretty easy.

But then, after a few days, you may find yourself wanting to slip back into old habits.

Maybe it’s raining and you don’t really want to go out and walk. Or maybe your day just gets away from you. This is when it’s important to have a daily reminder. Set an alert on your phone or add the new habit to your daily to-do list for a while.

Remember what I said earlier about not trying to change all the habits at once? This is why. Overloading yourself with reminders and a lengthy list will NOT help you succeed.

Instead, you’ll begin to feel overwhelmed and end up crawling right back to that comfy blanket nest on the couch with a plate of microwaved frozen burritos for dinner and no other thoughts in your head except binge-watching your latest favorite show.

Keep it manageable. You CAN handle more than you imagine, but don’t push those limits every day.

A daily reminder will help keep you on track until your new activity becomes part of your automatic routine… and then a true habit.

3. Make the New Action Part Of Your Routine Until It Becomes A Habit

Before your new non-lazy activity becomes automatic, developing a routine will help you get it done without having to rely on constant willpower or daily reminders forever.

James Clear recommends ‘sandwiching’ your new habit between something you always do [he calls this the cue] and something you want to do [the reward].

Let’s go back to our decluttering example. ‘Sandwiching’ would look something like this:

‘When I get home from work, I will declutter 5 pieces of clothing from my closet and then change into my comfortable clothes.’

The cue is getting home from work and going to your room because you always change your clothes. But your new habit sandwich adds the very specific step of decluttering 5 items from your closet BEFORE you get that reward of changing into those comfy clothes so you can relax.

Something similar could also work with exercising. You could say, ‘When I get home from work, I will put on my workout clothes and walk on the treadmill for 15 minutes. Then I will change into my comfortable clothes.’

Practice this routine every day, and eventually, you will find yourself looking forward to the new habits as they become part of your identity.

How Long Does It Take To Create A New Habit?

It takes some time before a new behavior becomes an actual habit. Be realistic about your expectations and understand that you’re going to have to put daily thought and effort into this for a while.

Some people say changing a habit takes 21 days. For the majority of us who are overwhelmed overthinkers, it’s actually more likely that each change will take 66 days or longer to become a habit.

Your best plan of attack is to work on one area at a time. You’re not going to completely solve your whole lazy life in a week or two, or even two months, but you’re going to make considerable progress. And just imagine where you could be a year from now!

Which life area would you change first to make the biggest difference in your life and make the next changes easier?

Master changing one lazy habit at a time.

Yes, it will take some time to form new habits and completely replace the habit of laziness. But it will be well worth it in the end. You just need to begin with ONE thing.

What Should I Do If I Mess Up?

Let’s be honest — nobody is perfect. It’s nearly impossible to introduce a new habit and implement it with a 100% success rate from day 1.

There’s nothing wrong with enjoying a lazy day now and then. We all need a break.

However, while you’re in the habit-building stage, do your best to keep to the parts of your daily routine that incorporate your new habit.

The key is to not throw in the towel if you make a mistake or fall back into your old lazy ways for a day.

One bad day is not failure. You absolutely must remember that!

Tomorrow you can get right back into practicing your new non-lazy habit.

More Help With Laziness and Procrastination

6 Powerful Life Hacks You Need to Stop Being Lazy

The Power of Habit: Why We Do What We Do in Life and Business by Charles Duhigg

How to Develop Your Finishing Instinct: The Magic Final Step to Real Productivity

Grab the printable anti-laziness worksheet and reminder list. They will help you work through some questions so you can make a plan.

Review the list and your worksheet plan every day — and then DO THE THINGS. One more tidbit from Atomic Habits: doing and making mistakes is always better than constant planning without action.

Keeping that in mind, you really can change the habit of laziness and Build Your Best Life! 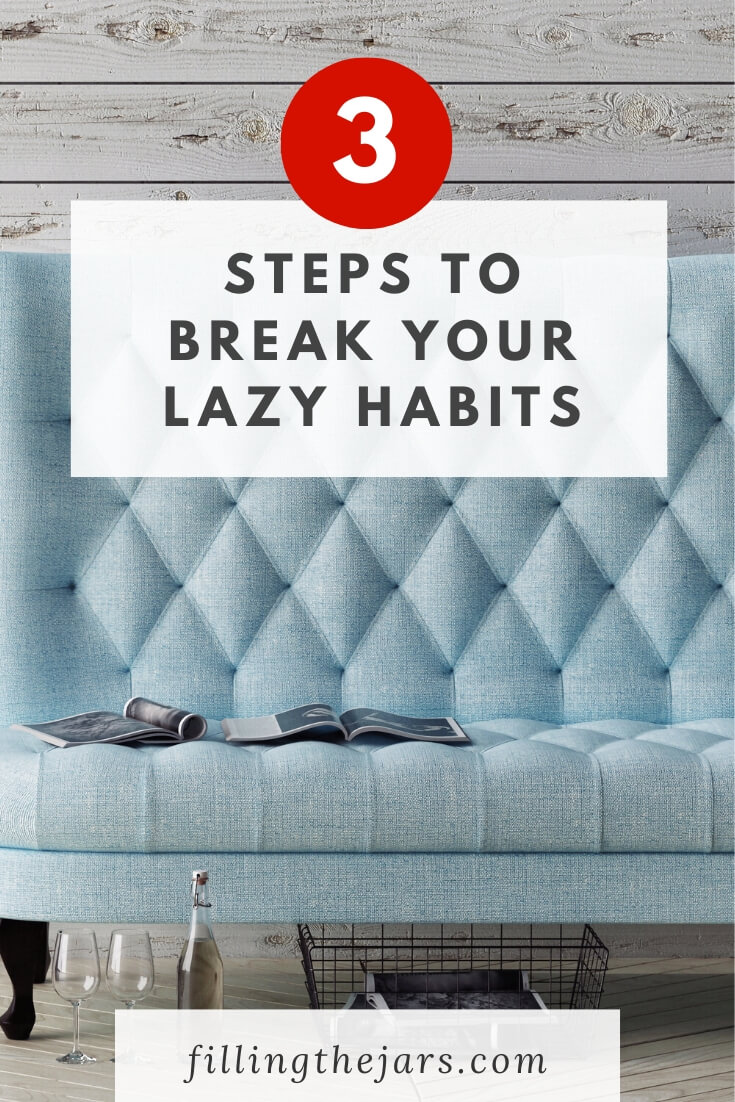