Wow, it’s already Week #7 of posting my writing excerpts. This week has a few blank days because I took a computer break for a while.

Note: This series of Writing Excerpts was originally inspired by this post and Jeff Goins’ My 500 Words challenge.

Have all the stories been told?

I searched through every source of writing prompts I could find. Every single one of them brought to mind a story or a book I had read before. Or else it was just sort of weird. Even the list of prompts I made up seems weird.

I’ve never been comfortable around other women, probably because I know that I could never EVER measure up to the high standards of being a girly girl. And if you can’t relate to the joys of a mani-pedi or leg waxing or – gulp – spa day – then it’s much safer to just stay in your own little world. Yeah, the idea of doing any of those things totally freaks me out. Also, knowing that as soon as you leave the little group, everyone will be getting in their digs about you – just not really comfort-inspiring. Because, ladies, how many times have you been around a group of women who DIDN’T have something snarky to say about pretty much everyone? It’s freaking scary.

I can almost never remember the endings of books or movies. Does that happen to anyone else? It could be the most monumental book or movie EVER, moving me to actual tears or maniacal laughter. But ask me a couple of days later how it ended, and my mind is blank. Hmmm… is that why I have a difficult time finishing things? Because deep down I believe that nobody is going to remember how my stuff turns out anyway?

I’m perfectly content to not have a super-clean house. Because I’m not a maid and I refuse to run around cleaning up after males who are too rude to take care of themselves. Just to be clear, I love my husband and my boys. But their dirty socks will lie wherever they are dropped throughout the house, untouched by me. Not. My. Job.

I love my cell phone. I’ve only had one for about a year, but it has become my favorite gadget. Honestly, I put off getting one because I knew this would happen. Sometimes I give it a little “I love you” double-pat as I shut it down for the night. Kind of like putting a baby to bed. I think I should name my phone.

(Life before every snowstorm.)

The storm was coming. She didn’t usually believe overhyped weather reports, but this time she could FEEL it. Having lived in the country for years, she was prepared. She had 16 gallons of water, 3 cases of drinking water, and several 5-gallon buckets filled with water for general use. The stove, oven, and water heater were propane, so they would still be operational if the power went out. Once again she was grateful they heated with wood, and the woodbox was stacked nearly as tall as she was, enough for at least two days no matter how low the temperature dropped. She had tested the generator that morning and had been able to get it running, which was always a bit tricky. Three 5-gallon gas cans were filled and standing by. Her cell phone and tablet were charged. She also had an old-fashioned corded phone that did not require electricity or cell towers. Candles and flashlights were waiting on the kitchen counter, including a headlamp in case she had to start the generator in the dark. The dishes were done, all of the laundry was done, the bird feeders were filled. The truck had a full tank of gas, just in case something totally crazy happened and they had to evacuate.

As she sat at the computer, still not quite awake thanks to Daylight Savings Time, she realized that she could hear frogs. Less than two weeks ago there had been a nasty snowstorm, last week had brought the emergence of the skunks, last night the time had changed, and now today the frogs were croaking. She realized that she hadn’t even looked for any robins or red-winged blackbirds.

Of course, she hadn’t really been conscious for the past several days. When she wasn’t at work, her head was buried in a book. She had read more in the past week than the past two months. Her head was swimming with words. The books were starting to become one story. Her dreams were a mish-mash of newly-met characters. She wanted so very badly to begin the next book on the shelf, but realized that she needed to take a break and deal with some real life for a while. At least for a day or so.

The book binge had been a direct result of digital information overload. Every day had become a fight to keep up with emails, blogging class, new posts from favorite bloggers, social media (even Pinterest had become a chore and all of the items in her feed were starting to look the same). So one day she read instead. She didn’t tweet. She didn’t pin. She didn’t post. She put aside the blogging assignments. She just read — and went to work, and cooked dinner, and slept, but she didn’t worry about posts and tweets and pins.

After a few days of reading, she felt ready to re-enter the digital world on a very limited basis.

And maybe go outside. Into the new season. 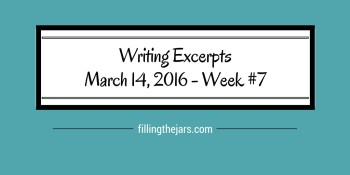