Here is the fourth weekly collection of excerpts from my morning writings. In this post, I challenged myself to post some of the things I write each week. The writings originally began as a combination of Money Saving Mom’s Get Up Early Challenge and Jeff Goins’ My 500 Words challenge, which I wrote about here.

I have since completed the 500 Words writings and have been searching for a new set of prompts. I believe I have found a pretty decent list here. I still aim to write 500 words, but sometimes it ends up more like 300, and sometimes it’s just a random thought I throw out and never actually finish.

The daily writings are unedited for spelling and grammar. I decided to just post what I had written as it was. I have not included every bit of each day. That would make the post very long and I do keep some of my writing to myself.

If you’re interested in the My 500 Words challenge, you can find out more about it on the official challenge page here.

Do you think fairy tale writers started every story with “once upon a time” because that was the only way they could get the words to flow? What if we had to begin every story in certain genres with a targeted phrase? Either every book would begin the same, or we would invent new genres in order to circumvent the “rule.” I wonder what the new genres would be?

Wow, I had ZERO emails today when I opened my gmail. Not even any promotional email. I don’t know if that’s happened even once in the two months since I’ve had my new email address. I’m starting to get a little paranoid. Did someone hack & redirect? Does nobody like me, even the automated email list peeps? I also had zero Twitter notifications. Lately I’ve had at least 2 or 3 every morning.

About two months into blogging, the ideas suddenly began to flow. For weeks I had struggled to come up with two posts a week, and then one day I sat down and filled a content calendar with three posts per week for the next two months. I had begun to think that I wasn’t really a blogger at heart. I don’t know what changed for sure, but lets try to break it down.

First, I stopped stressing over not having a narrow niche.

Second, I stopped worrying about the fact that every post idea I thought of was suddenly a popular topic by some of the most popular bloggers. Seriously, for a while it did not fail that I would think of a topic or a resource to include in a blog post, and within 24 hours I would see that exact thing being discussed by bloggers with about 100,000 times the reach I have. I’ve decided to write about that stuff anyway.

Not limiting myself has allowed me to brainstorm many more ideas.

I know eventually my blog’s focus will naturally narrow. Supposedly that will gain more followers. But for now I want to figure out what I like writing about the MOST.

Small home living / organization / simplifying
Meal planning / cooking / some recipes
Money management
Blogging itself – tips, thoughts (Maybe only update posts since I’m not that great at it yet?)
Writing in general – relearning the process

A future without books or handwriting.

It’s the year 2238. Trees have been on the World Endangered Natural Resource list for 75 years. To prevent complete deforestation, the production of paper from trees is no longer legal. Nor can it be made from flax, cotton, bamboo, corn, or any other plant. Under strict access control, books are only available electronically, with audiobooks accounting for 95% of all sales. Libraries are nearly extinct, with the majority of their books now in private collections or museums. The mere possession of a book in paper form is illegal.

The planet is in talks to become one republic. Every citizen is implanted with a microchip at birth. Through this chip, most aspects of daily life are tracked and controlled. Graduates who can perform fine manual production labor are in high demand. No place on the planet is out of internet contact or hidden from government view. Nearly every moment of most lives are captured and shared on video through the internet – there are 15 billion channels, one for each person.

Crippling debt has caused many world citizens to seek out indentured servitude as a means of survival.

Your feelings on ageism

Oh, this is an interesting one. I actually didn’t really believe in it until after I began job hunting last summer as a woman in her mid-40’s. But for the first time in my life, I was not hired for the first job I interviewed at. Or the second, or the third… right through the seventh. When I had begun my job search, I had seen a couple of women complaining on a message board about the difficulty of finding a job after 40. I was thinking, “Right. They must not be very qualified. That won’t be me. I’ve never had a problem being hired because I’m fairly intelligent, almost never miss work, have a range of skills, and I’m willing to work hard and learn more.” I am certainly eating my words now.

And I’m not even old. I can’t even imagine what it’s like to be 70 and need to get a new job. Not that 70 is all that old, but to interviewers who are often in their 20’s or 30’s, that 40-year mark seems to be the cutoff for people they want to hire and work for. As I look back now at the jobs I’ve had, I realize that new hires were never over 40 years old. I never thought about it then, but I sure do now!

For some reason, “older” people are perceived as slower, less healthy, and unwilling to learn new technology. But sometimes, when they ask those questions that you think exposes their failure to grasp newer concepts, what’s really happening is that their experience is attempting to teach you to have a more open mind and consider other options.

Of course, I do have a bit of a double-whammy going because I am also overweight. Think about it. Would you rather hire an overweight woman in her mid-40’s, or a slim woman in her upper-20’s or even mid-30’s? Right, I thought so.

Five fears that you have

1. My younger son’s epilepsy will return. Even though he is over 4 years out from surgery and still on one med, without a sign of seizures, I watch every move and expression he makes in total fear that I will see that one little signal of an impending seizure.

2. My older son will finish 4-5 years of private engineering college with 80-100K in student loan debts and either not get a decent job or decide he hates his major. Mostly that he won’t get a job.

3. Dying too young. At 44, with most of my family members living well into their 80’s and 90’s with fairly decent health and mental capabilities, I usually don’t worry excessively. But then I think that maybe I’m taking “good genes” for granted. And then I worry about not seeing my boys grow up.

Huh, that’s about it. When it comes right down to making a list, I really don’t have that many fears. Hmmmm…. then why don’t I live a fearless life? Hmmmmm…..

Are you doing a writing challenge or posting any of your personal musings? Leave a link in the comments or email me – [email protected] – I would love to read what other people are writing! 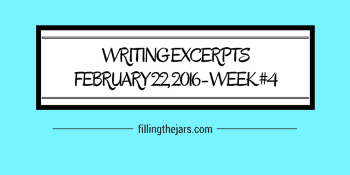