In other words, welcome to Week #9 of Random Musings.

Note: This series of Writing Excerpts was originally inspired by this post and Jeff Goins’ My 500 Words challenge.

For April, I found a new writing prompt list. You can check it out HERE. I don’t know if they were supposed to be done in order, but I’m doing them according to what sounds good for the day. You know, because I’m a rebel and I make my own rules like that.

First, I have so say that I am fortunate to have never sunk into a deep depression, and I have the greatest sympathy for those who have.

But every year, just as winter seems to be loosening its grip and spring is just around the corner (usually February), I start slipping toward the brink. I don’t know if it’s the lack of sunlight from the winter months or what, but it’s a scary time. And even though I know it’s going to happen, and every year I hope it doesn’t, I can never seem to prevent it. It’s like I’m going along in my life, just normal, and then all of a sudden I realize that everything is NOT normal. I don’t want to cook dinner, I don’t want to talk to anyone, I just want to sleep in my cozy bed with my electric blanket.

Some years are much worse than others. Thankfully this year was not too bad. Still, I’m looking around my house and realizing that I’ve been “off” for the past few weeks. It’s not just that I’m busier with being back to work part-time. (Which I’m actually very happy about!) I just noticed today that I haven’t taken care of the pine branches that have been decorating my front porch since the end of November. Honestly, I haven’t even noticed that they’ve been dropping needles every time the wind blows. Usually I remove them at the end of February. Of course, maybe the fact that it hasn’t.quit.snowing. has something to do with it – it just feels like winter is never.going.to.end.

I think someday I would like to go somewhere sunny during the winter months. Maybe in a few more years.

Suddenly it seems like everyone wants to be an introvert – how did we become so popular?

But sometimes when I see all these people claiming to be introverts, I think to myself, “You’re not really one of us.”

Then I feel bad.

But then I see posts like the one from Erika Madden about how being an entrepreneur is scary, and I know there really are other people out there sort of like me.

I wish my extrovert husband could understand that sometimes my quietude does not mean I don’t want to talk to him. It’s just that I’ve spent all of my social energy interacting with other people that day. Or sometimes I’m so deep in my own head that it’s pretty hard to climb out.

And then I wonder why anyone would want to be an introvert?

Calendars are fascinating. At their most basic, they are a tool for marking time. But we have given them so much more power than that. We have come to believe we can almost CONTROL time with a calendar. We put everything “on the calendar” and set alarms to remind ourselves of special days and meetings and appointments.

When I was younger, I used to find a calendar I loved to hang on my wall every year. I would also have a pocket-size calendar that I could write in (I could write very small) and kept it almost like a diary. Then in my 20’s when I had my first “real” job, I was introduced to something called a Franklin Planner (20-ish years later, I think they’re called something else). I was immediately hooked on the feeling of control.

I still love calendars and paper planners. I adore being able to see an entire month or year laid out right in front of me. I don’t even necessarily need to fill all of the days — although I do, mostly with mundane chores that seem so much more important when written “on the calendar.”

But being reminded that someone took the time to mathematically figure out how a calendar should work is simply amazing.

I know there are those who don’t use a calendar. The days flow, the seasons come and go.

Using what has come before to predict what will be. Yet not learning from history.

Yep, truth. Every morning I sit at my computer and watch them in the backyard. Although they aren’t even bunnies, they are giant rabbits. There are at least three rabbits running around. They look sort of cute when they huddle up on the grass and nibble. But they are actually a little scary when they are hopping around, all gangly and huge. Bunnies = cute. Rabbits = notsocute. I would imagine there will be little bunnies soon. Three adults, pretty good odds they aren’t all male or all female. They live under a shed. For quite a while I thought there was just one, since that’s all I would ever see hopping through the yard. Then a couple of weeks ago there were three. I wonder how many more we actually have? I guess it’s a pretty good bet that we won’t be trying to garden this year.

Sometimes the rabbits will hang out under the bird feeders at night. Our dog goes a little crazy and always thinks he can catch them. We let him out to try, but it’s never happened. Not even once. My husband laughs, but I think he’s a little ashamed of our silly dog. I just think it’s funny, and I figure at least he’s getting some real exercise by running around on his 9-year-old bones.

She took a sip.

Her eyes scanned the room over the rim of her glass. For the first time in years, she wasn’t responsible for transporting herself or anyone else for the evening. She could not remember the last time she had been able to indulge in more than one alcoholic drink. But tonight she was in the city, with cabs just a phone call away.

Oh, it was going to be a very good night.

OMG, what had she done? Her head was splitting, and she knew she would never make it to the bathroom before she was sick.

She hoped the night had been as good as expected, because so far the morning sucked.

She took a sip.

And immediately spewed the horrendous-tasting liquid onto the floor. What the HELL was that?

“It’s kombucha, dear. Believe me, someday you will love it.” Although the old lady had a kind voice, Sarah didn’t believe a word she said.

She looked around at the small home. It wasn’t “tiny house” trendy, but it was compact, bright, and very neat. Sarah doubted the old woman had ever heard the term “minimalism,” but she could see it in action here. The place was simple, relaxing, and beautiful.

“Kombucha is a tea. And it will help to heal you.”

Heaven knew she could certainly use that!

Are you writing or reading anything interesting right now? Post a link, I would love to read it!

Have a wonderful week! 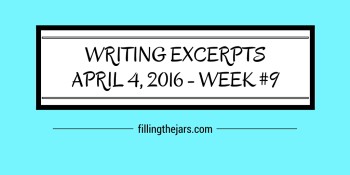